Cinema has that magical Disney wand that can metamorphose hideousness into splendor and villains into martyrs. A powerful instrument of cultural hegemony and a hypnotic and omniscient storytelling machine that can re-write historical facts for whoever pays and wants narratives effaced or altered to fit certain agendas.

Recently, the American directed and produced, and Emirati funded movie Mosul did just that. I am a witness of the Mosul war of 2016-2017 that was at the forefront of warfare, and feel it is my moral duty to rectify the mutilated tale presented in the Netflix motion picture. If I had to direct an impartial and unbiased film, this is what I would capture.

Often the traumatized brain projects aspirations into reality, materializes heroes that do not exist in an attempt to process psychological distress. A Nineveh SWAT, constituted from Mosul citizens is pure fiction to cover up for the shameful images of local forces who disgracefully threw their clothes in the streets and deserted their positions when ISIS insurgents seized the city in 2014. 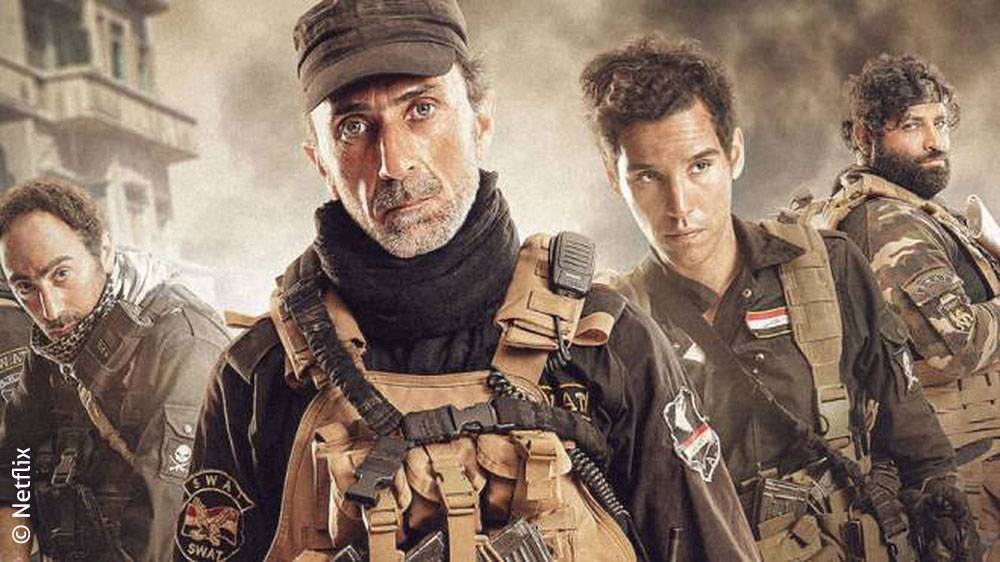 According to UN reports collectively foreign fighters in both Syria and Iraq weren’t more than 40,000 mercenaries. A legitimate question would be: How did this meager number of combatants subdue over five million inhabitants in the Nineveh Governorate alone? The answer that you will never find in a Hollywood movie, especially Gulf funded ones is that most ISIS troops were local Sunni Iraqis.

Thousands of average citizens decided because of the sectarian spiral of violence to pay allegiance to the so-called Islamic State. Every week, for over seven months, I would visit these lured souls clustered inhumanly and tortured in Kurdish prisons. Most were mere adolescents with below-average intellectual capacities to comprehend the enormity of their actions or the destiny they were born into after the US invasion of 2003.

I am a witness of the Mosul war of 2016-2017 that was at the forefront of warfare, it is my moral duty to rectify the mutilated tale presented in the Netflix production #Mosul

Kurdish Peshmerga and by extension the Asayish forces in the urban areas and the Zeravani in the rural zones, stirred a lot of attention during the Mosul war after they publicly milked a limited victory in Sinjar and all the attention drawn to the Yazidi minority by international humanitarian groups. Anyone who even remotely followed the conflict, knows that Kurds were ordered by the Iraqi army not to cross the Khazir river, and consequently had absolutely no credit in the liberation of the city. In reality, what very few reports documented is how the Kurdistan Regional Government seized the chaos that happened in June 10th to expend its territories into the Nineveh province bulldozing tens of Sunni Arab villages and forcing its populations to flee to ISIS as they were left with no other choices.

The real heroes you ask? Those were unprecedentedly brave and valiant Iraqis from all ethnicities and doctrines, especially those from the southern provinces. The Golden Brigade, an elite special forces SWAT, would go first followed by battalions from the 2nd and 5th divisions of the Iraqi army. The Popular Mobilization Units (PMUs), Shiaa militias with alleged affiliation with Iran, selflessly fought for Iraqi populations regardless of any sectarian divisions in all of Salahuddin, Diyala, Nineveh, Kirkuk, and Anbar. Before the US and Gulf media decide to demonise them due to tensions with the Persians, I recall local populations welcoming them with flowers and chantings.

Contrary to the popular beliefs many PMUs were actually from local minorities likes Assyrians, Shabaks, and Faylis as well Sunnis militias called Tribal Mobilization Unites. We can speculate all we want about the funding and agendas of each of the actors on the field, but the fact is there was a unique momentum of national unity under a central command in Iraq that led to the liberation of its northern provinces.

Besides all the fraudulent plot claims, director Matthew Michael Carnahan did get one thing right; the disturbing magnitude of the destruction of a millennia old city, a menorah of culture and diversity reduced to a pile of rocks. Carnahan benefitted from his previous zombie movie’s experience to draw an accurate yet devastating image of rubble-choked alleyways, deserted streets, vehicle-borne IEDs, and crumbling cultural heritage sites.

In the mountainous resort town of Shaqlawa lays a small Kurdish prison that hosts around 60 men with an unexpected story. These were educated doctors, teachers, judges who woke up one day to Peshmerga tanks destroying their villages in the Hassan Shami and Tal Aswad area along the Khazer river. They have been detained secretly since without trials in this remote location. When I visited them in 2016, they had already spent two years with no news of the external world. Their villages ironically became the site of UNHCR refugee and internally displaced camps, without the UN carrying any due diligence on the massacres that happened on these lands.

How did 40,000 "ISIS" combatants subdue over five million inhabitants in Nineveh Governorate alone? The answer that you will never find in #Mosul, a Hollywood production, especially Gulf funded ones, is that most ISIS troops were local Sunni Iraqis

I once met a woman weeping behind one of the muddy camp fences. When I asked her if I can help, she retorted “I can see the remains of my house over there but can’t reach it as I am imprisoned inside this camp”. Sometimes I wake up terrified from nightmares where the 60 men in that humid rotten prison stare at me in the eyes and say “You forgot about us. No one will ever know our stories”. 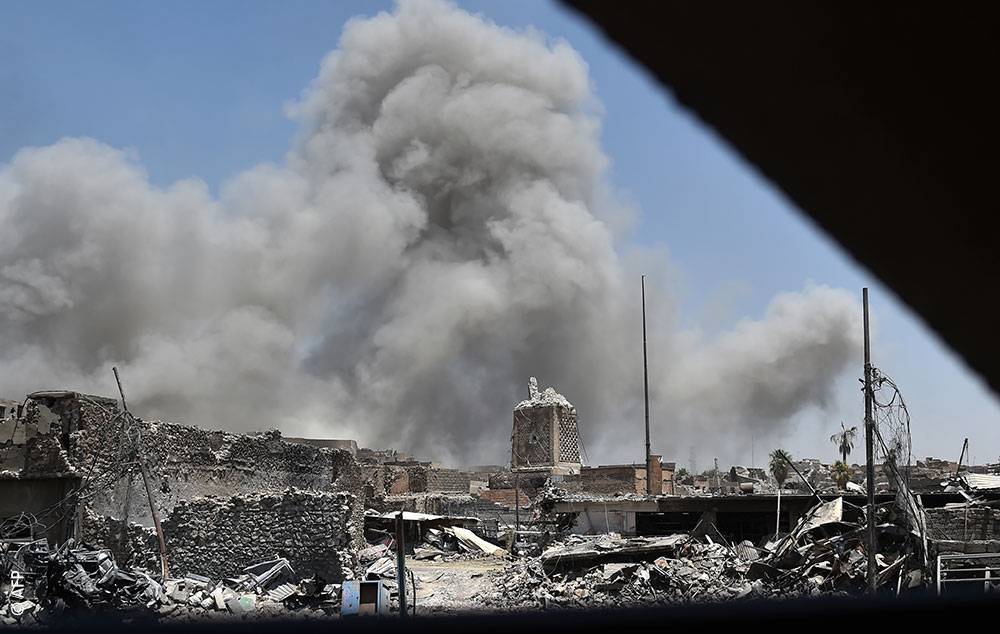 The second scene takes place in the Christian city of Bakhdidaaka aka Karaqouch. I had entered the freshly liberated town with a military convoy as the first representative of an international organization on the ground. ISIS had bombed the local hospital and all civilian infrastructures before cowardly retreating. Karaqouch means black bird in Turkish, a name it was given under ottoman rule and so the profaned city’s cathedral was full of dark crows feeding on the body remains and blood of the dead fighters.

Between the burnt bibles, the smashed stained glass, and the charred alter, I found a piece of copper with the following engraving in Assyrian “Peace I leave with you; my peace I give you. I do not give to you as the world gives. Do not let your hearts be troubled and do not be afraid. John 14:27”. I kept holding on to the circular piece as a lucky charm as I left the obliterated city while fighting and bombing resumed in nearby alleys.

The third and last scene, takes us to Hamam Al Alil a strategic crossing point to western Mosul, not far from historical site of Nimrud, that was destroyed live by ISIS militants. As soon as our four-wheel drives crossed the improvised metallic crossing that substitute one of the many city’s bombed bridges over the Tigris, astounding explosions started shaking the ground under us. ISIS was firing its artillery on our direction with increasingly close distance.

About three kilometres further down the road, we stumbled upon PMU tanks firing back and shouting anxiously “Enemy at 13, enemy at 10, enemy at 5”, then suddenly an artillery shells hits two meters away from my feet leaving a gigantic smoky hole, killing four soldiers, and shattering the windows of our rides. Before leaving I asked the pale lieutenant leading the operations if he was afraid, he responded in his grave Nasiriya accent “I am ready to die for every inch of my country. It’s my honour” and countered “But what is a woman like you doing here?”.

It is hard to fairly convey the horror of Mosul, but also the bravery and sacrifices. I chose to leave out scenes of rapped and enslaved women, unidentified cadavers thrown in a pit that stinks from 10km away, child soldiers, ISIS checkpoints that threatened us at each crossing, foreign fighters in the secret American base of Harir, the tremendous work carried by international and local NGOs, separated families, and broken dreams. The stories of all these protagonists will fill several series and books without being exhausted.

My last week in Iraq was spent in Gehenna with a team of explosive experts cleaning a water plant from booby traps. A man said: “One day they will write novels about what happened here, I am sure they will falsify everything and the truth will be lost”

My last week in Iraq was spent in an area called “The Valley of Gehenna” with a team of explosive experts trying to clean a water plant from booby traps and explosive remnants of war. One of the men looked at the horizon and said “One day they will write novels and make movies about what happened here but I am sure they will falsify everything and the truth will be lost”. If he only knew how right he was…